How To Get the Perfect Photo Of the Aurora Borealis

Northern Lights season is upon us and that means that we want to capture those awesome, spectacular lights on film—or the modern digital equivalent. Now, you might wonder, how do I take the best photos of the Northern Lights? How do I make them look like they do in all those travel brochures? Despite what you may think, it’s not all Photoshop; the perfect photo of the Northern Lights is within your reach if you just get acquainted with a few of the less used buttons on your camera.

The Thing About Exposure 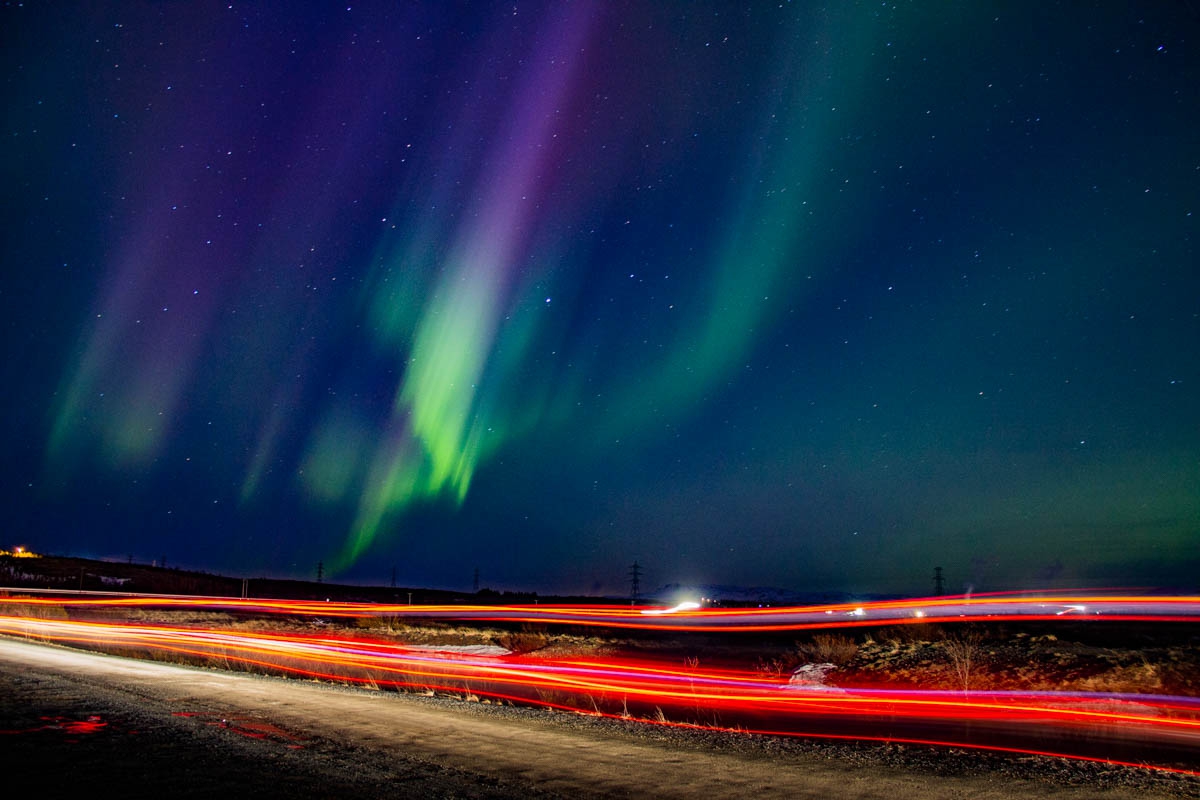 A photo with 30 sec shutter speed of the Northern Lights and a road with a passing car.

Now, you might have seen some gorgeous green slivers of light in the dark sky, snapped a photo and thought you hit the jackpot, only to check your phone to see nothing but darkness. The reason is that while your eyes are very apt to see things in darkness, your camera most likely isn’t. Also, the Northern Lights aren’t that bright; much dimmer than the moon, for example (don't include the moon on your photo unless you know what you are doing, it will get overexposed). Your eyes are also constantly getting exposure from the Northern Lights you are watching, but a handheld camera snaps a photo in just a fraction of a second.

Let’s start with the basics…

There are three things that control how much exposure your camera gets: aperture, shutter speed, and ISO. If you’re not familiar with those terms, here’s what you need to know.

Shutter Speed is just how long the lens stays open to take a picture. If the lens is open for a longer time, more light gets in, and you get better exposure. The thing with shutter speed though is that as you increase it, the camera needs to be stable, otherwise it takes in light from different angles, making the resulting photo blurry. I have shaky hands, so I can’t increase the shutter speed to more than a second unless I have a tripod. So let’s be real. To take a perfect photo of the Northern Lights, unless you have an incredibly expensive camera, you will need a tripod. That’s not an issue, though; tripods are dirt cheap.

Aperture controls the depth of field, that is, how much of your photo subject is in focus. If you set the aperture setting to a low number on your camera, the background of your picture will get more blurred. The aperture setting dictates how much light is getting into the lens because you are dictating how “open” the lens is. A low number means that the lens is more open, and thus, more light gets in.

ISO is just how sensitive you want your camera to be to light. Be careful when increasing it in daily use, since the photos will become grainier as the ISO goes higher. That doesn’t mean you should just set it to 100 and forget about it, the ISO can be a powerful tool, you just need to find what works for each setting.

First thing first, how do you find the Northern Lights in all their glory? Well, I recommend taking a tour. The main reason is you want to get out of the city (or town) because you don’t want the light pollution from all those street lights and houses battling with the Northern Lights for your attention. There are three main types of Northern Light tours: by boat, by bus, and by jeep. 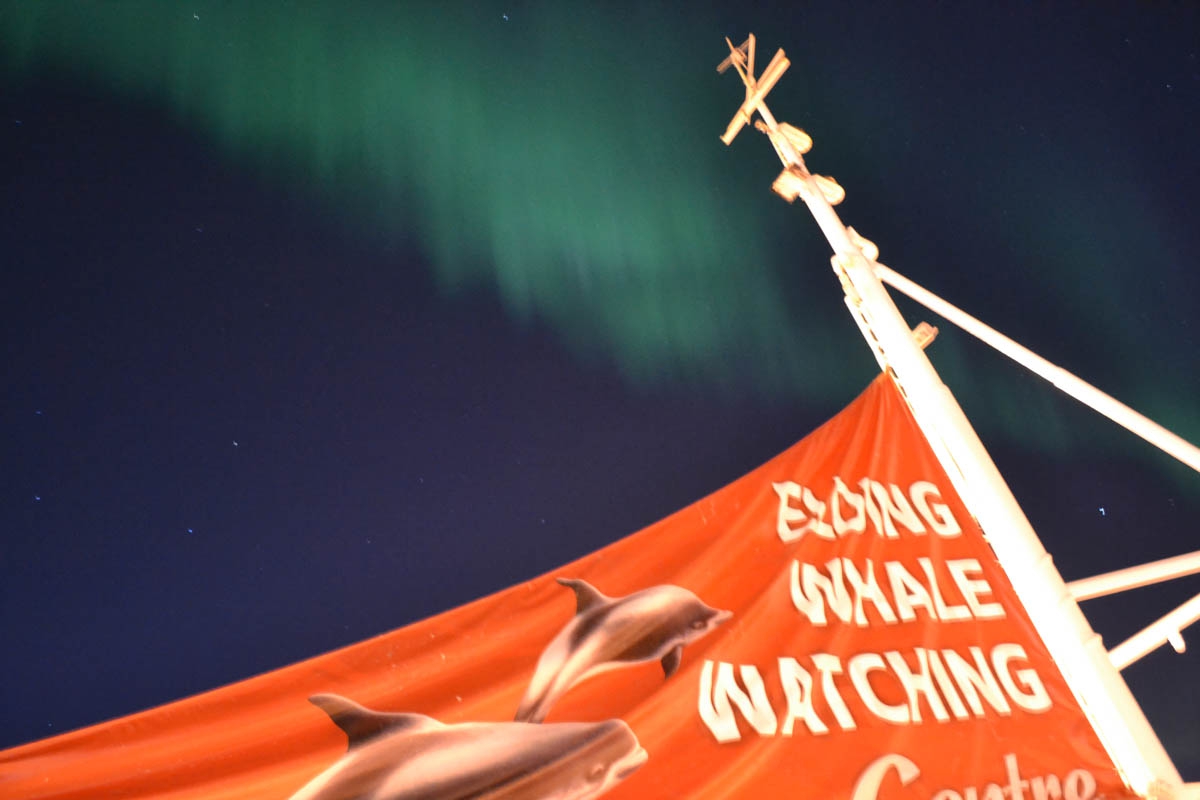 The boat tours are a great experience but you won’t get any good photos since the boat doesn’t provide a stable surface for your tripod. 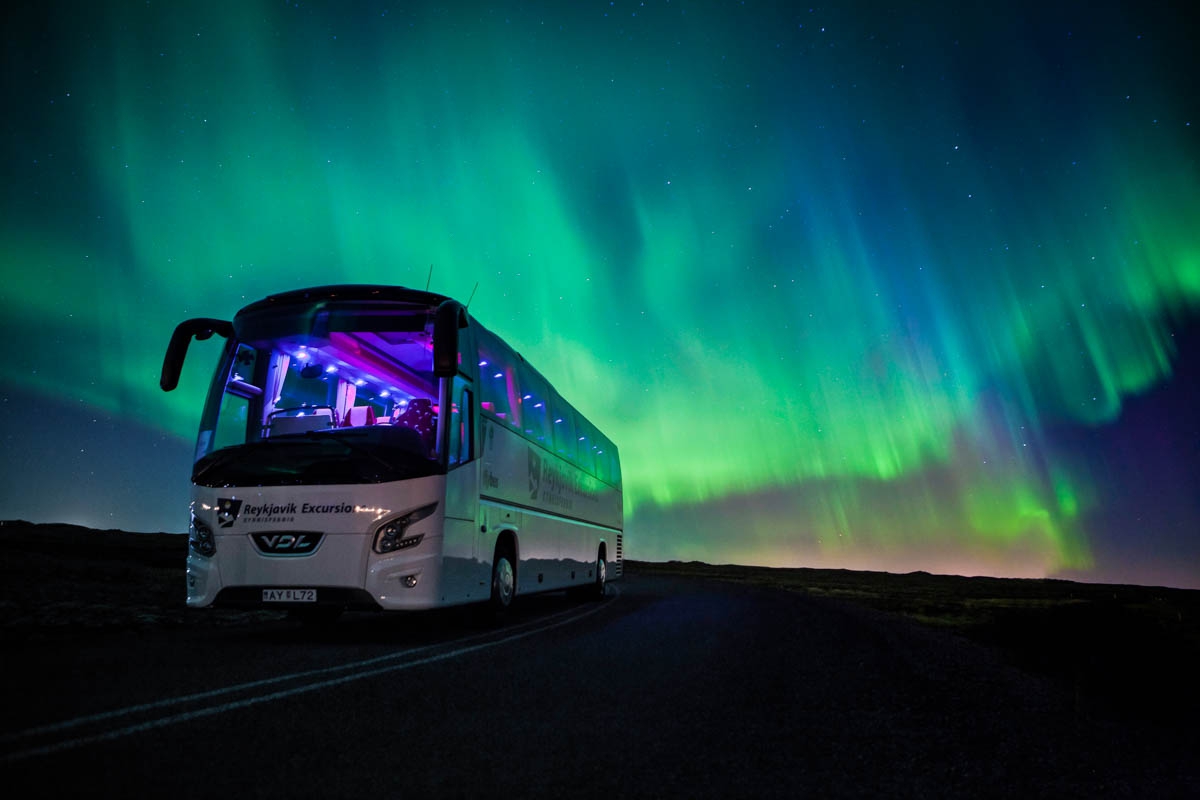 The bus tours are a better option, weither you choose a regular bus or a mini bus, since they are quite inexpensive; however, the downside is that the buses can just go on roads, there is a schedule that needs to be upheld most of the time, and you are going with a lot of people, so it may be a bit harder to find a good place to set up a tripod in peace. Experiencing the Northern Lights on a cool winter’s night in the middle of nowhere with a bunch of people is a great thing, though. 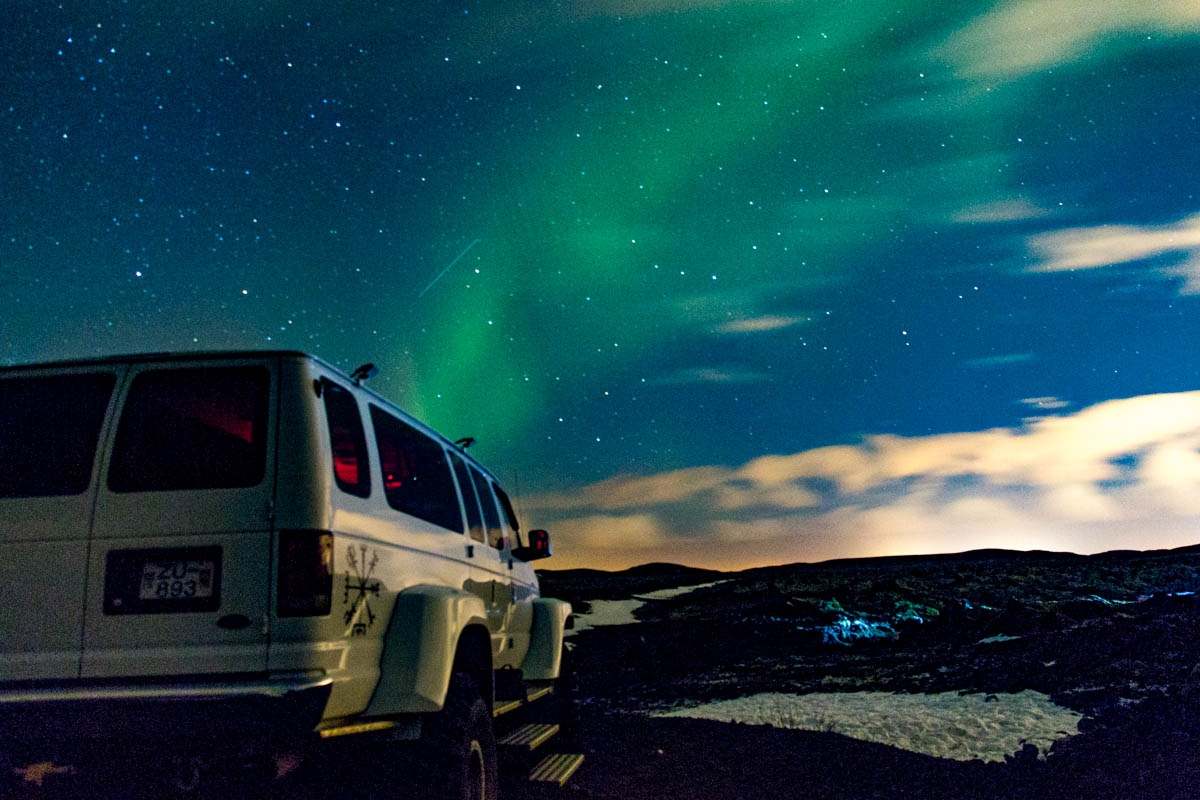 The jeep is the best option if you are serious about getting some great photos, whether it’s on your Facebook wall or your actual walls at home. The experienced drivers and guides will try their best to hunt down the Northern Lights wherever they are (they are a natural phenomenon, they don’t follow our rules), so you might find yourself upon a mountain or glacier, where no regular cars can travel, with nothing but darkness, nature, and the Northern Lights.

Okay, so you’re surrounded by the Icelandic nature, underneath the stars and Northern Lights, you’ve got your camera and your tripod, it’s time to fiddle with the settings! 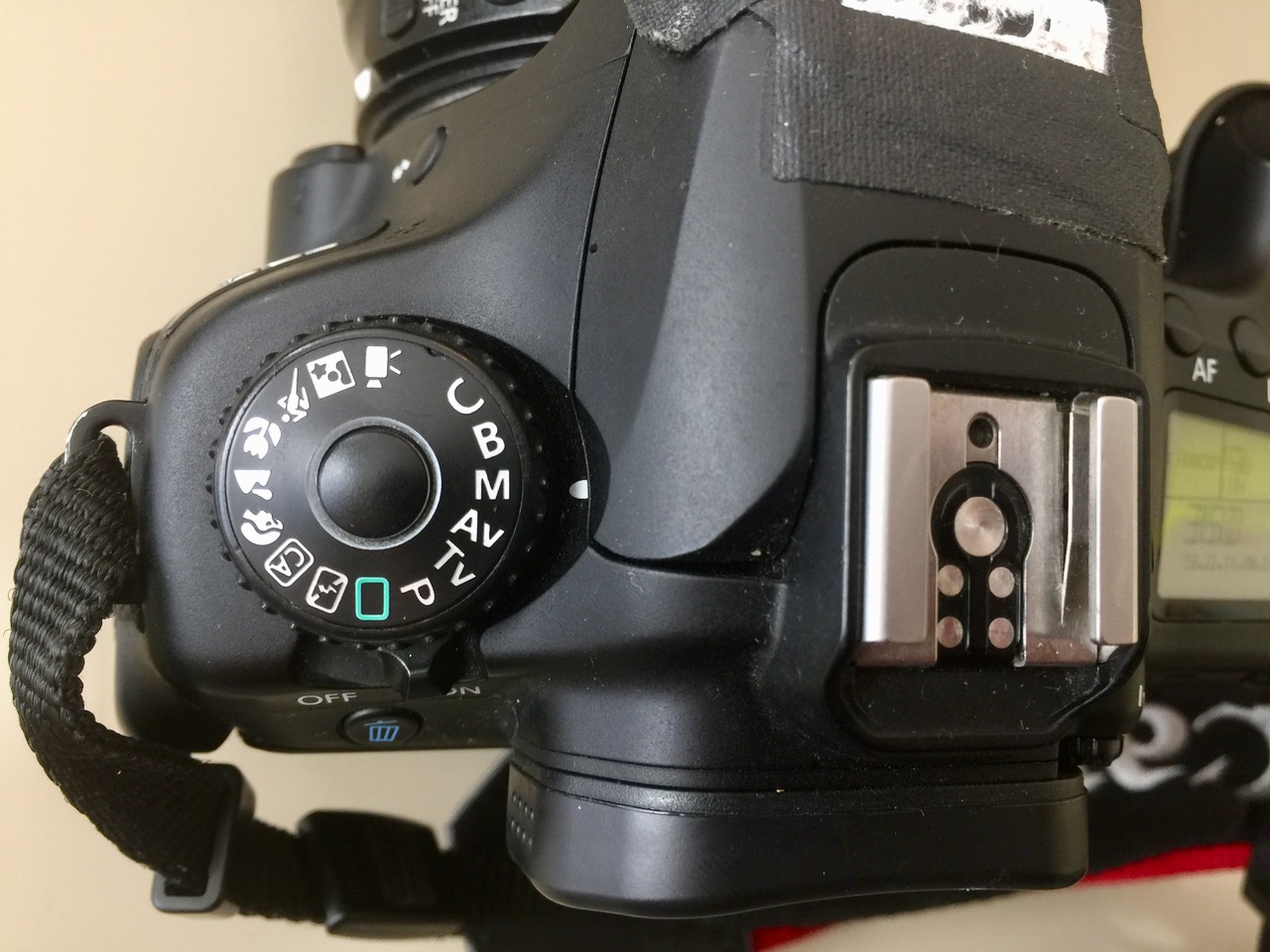 Let’s start by putting the camera on M setting (full manual, it's going to be okay) aperture setting on low, so you get as much light in your lens as you can.

Set the ISO to a manual setting. You want to play around with these settings, so it’s better to change the ISO manually, rather than to have the camera going all auto on you. Start with 800 ISO and see if you like the outcome. If you don’t, try adjusting it till you get what you’re looking for.

Then there is the fun part, the shutter speed. Try setting it to 10 seconds at first and see what you get. If you like the outcome, go with it, but I often take Northern Light photos at around 30 seconds. Just be careful, if you have it on too long, the photo can become a mess of fragmented pixels. You don’t need that in your life. If 30 seconds isn’t giving you enough Northern Lights, try increasing the ISO to 1600—even up to 3200, if you’re feeling lucky. 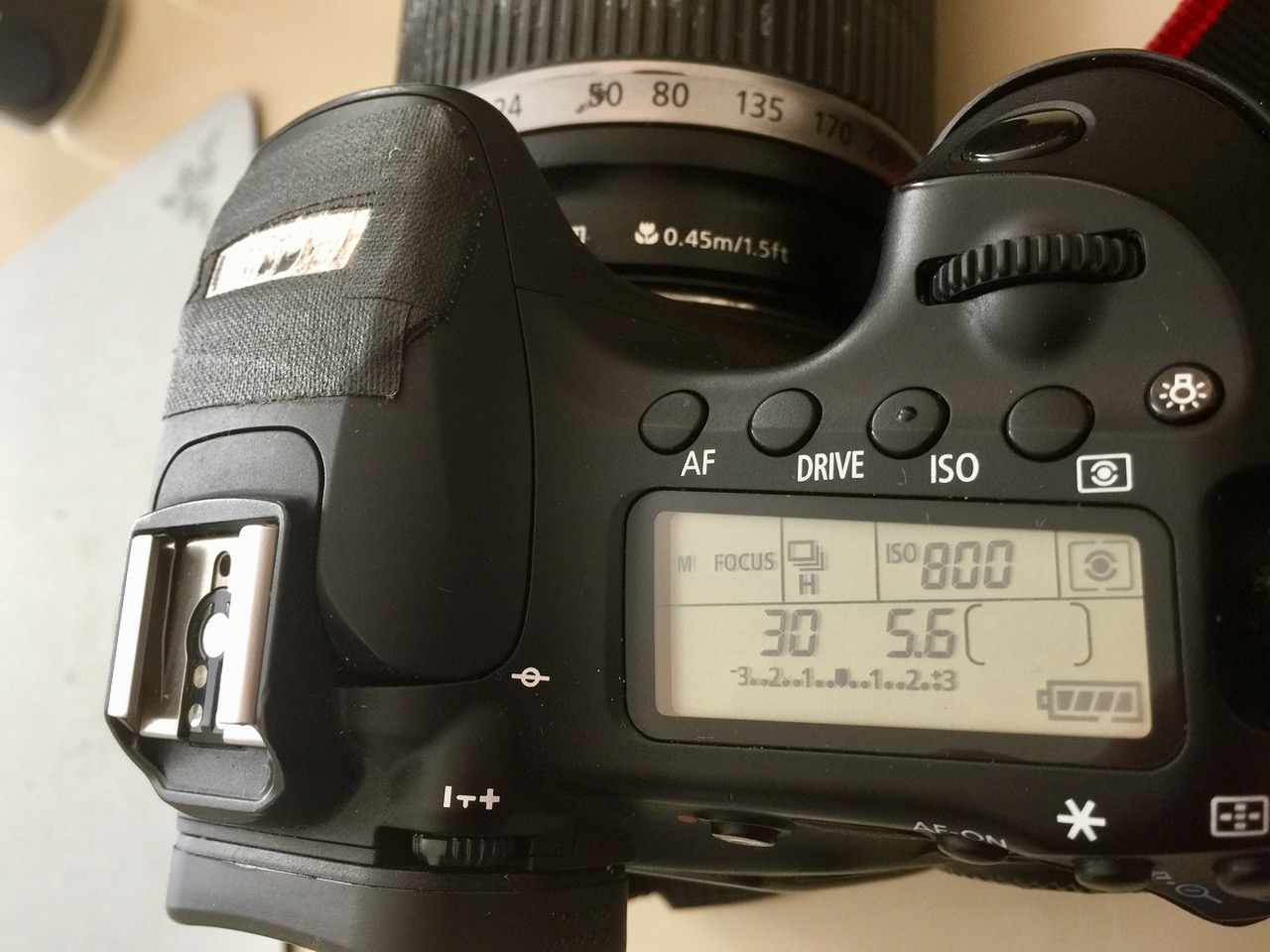 These are just some guidelines to get you started as this isn’t an exact science. There are so many different factors in the eventual outcome that you’re best off trying a few different things to figure out what you like best.

For the patient photographers who read this all the way through, here are some extra tips. One thing which is useful is a remote for your camera. They can be bought both wired and wireless, and some cameras can even hook up to your phone. Using a remote decrease the likely hood that you shake your camera when you press the shutter release button (take picture button).

Focus is something that’s very important too since you will have to set it to manual. Most lenses allow for manual focus, even though most people never use it. When you are trying to take a photo of lights, and not an object, the autofocus equipment in most cameras won’t work, so you won’t be able to take a photo, period. Set the lens to MF and just crank it up, snap a photo, check if things are in focus, if not, turn the lens the other way. 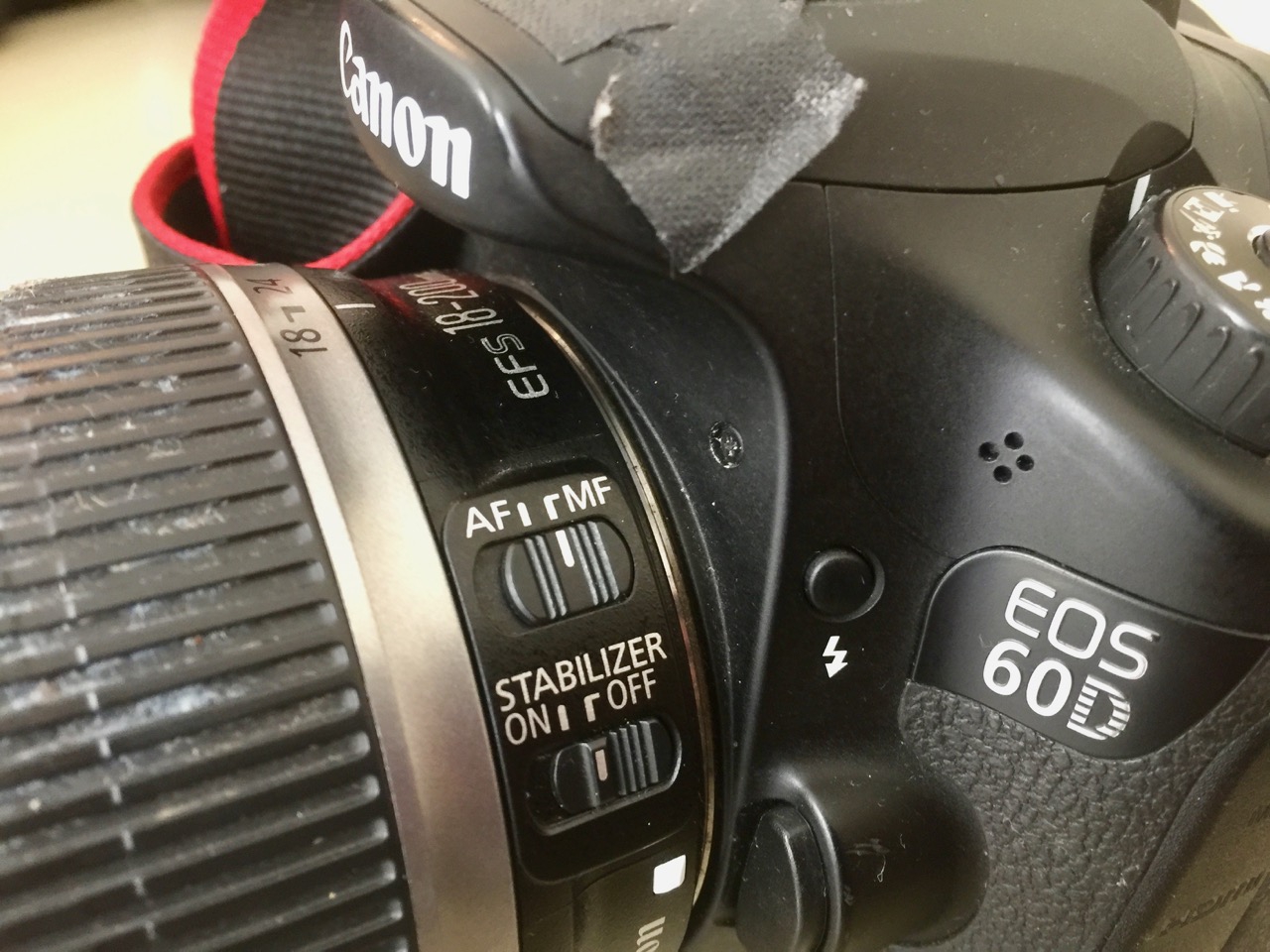 If your camera allows you to do it, shoot in RAW format, not JPEG. The RAW files are much bigger than their JPEG counterpart (a 3-5mb JPEG can be a 30mb RAW file) and as you might assume, that means there is a lot more information on them. When shooting in JPEG, the camera automatically edits your photo so you can use it right away, and discards "information" it doesn't use. That information are pixels that the camera sensor caught which you might want to use. The downside is that you will need to edit your files manually in PhotoShop, Lightroom or other software, but when you realise just how much of the Northern Lights you actually caught, you will be satisfied.

A photo of the Northern Lights in RAW format, straight from the camera 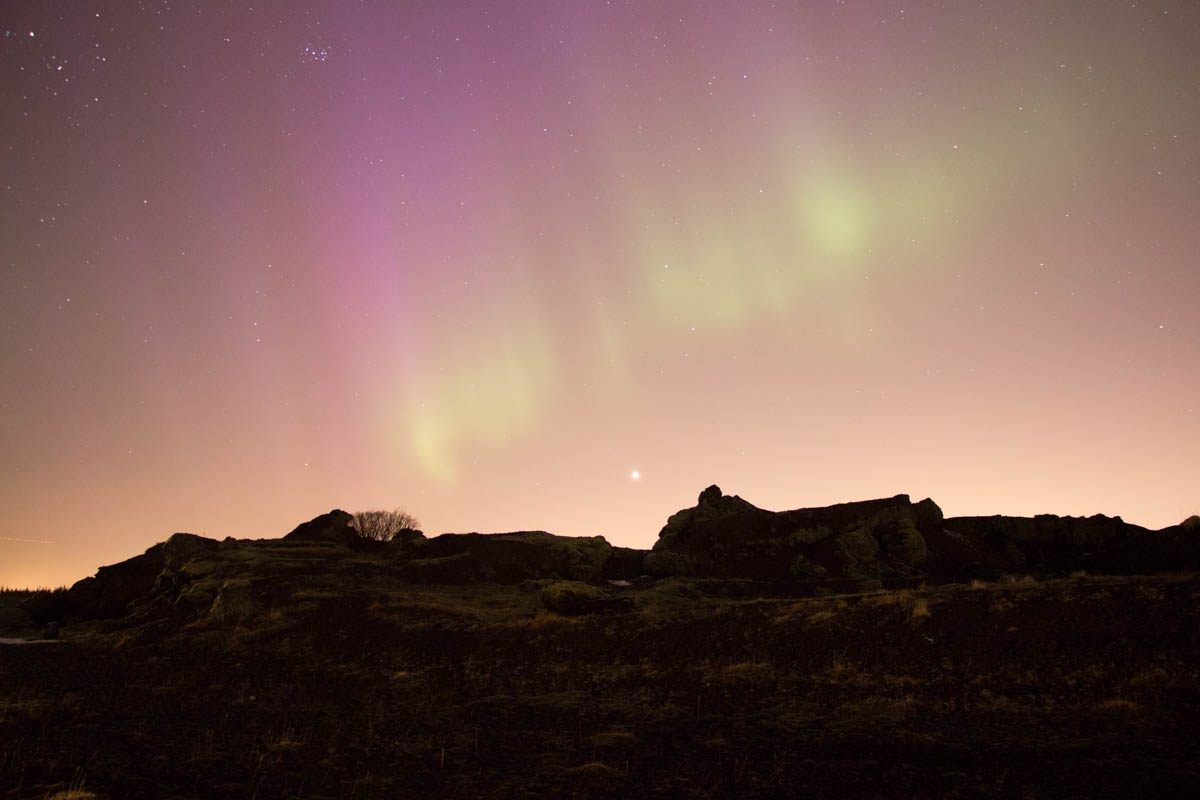 The same photo, edited in LightRoom. 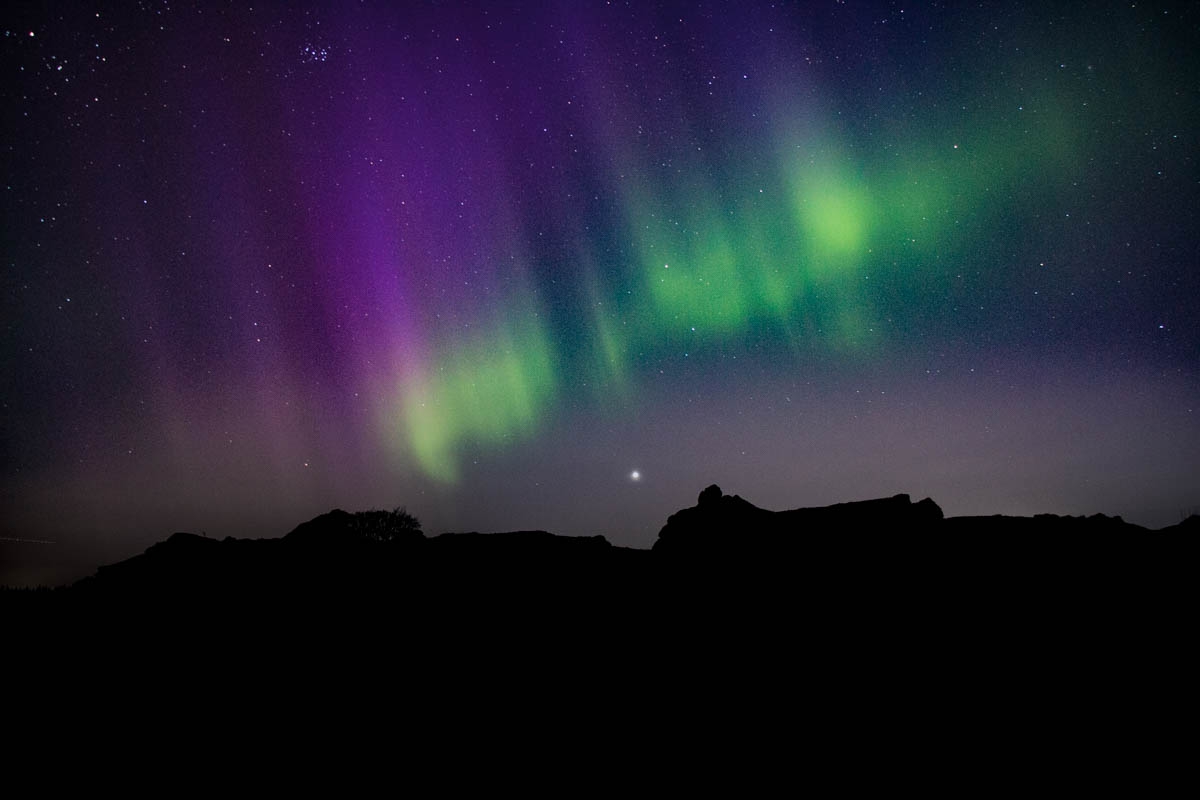 A couple of years ago, I would have told you to forget using your phone, but nowadays, many smartphones are perfectly capable of taking lovely photos of Northern Lights if you just manage to find a way to keep it steady. You can change most of these settings on your phone too. Most Android phones have a default photo app where you can go to “expert” or “manual” mode, and there are a lot of Camera apps, both for Android and iPhone, that allow you to get more of a DSLR camera feel on your phone. Let’s not forget that smartphones today often have great cameras, and you can test yours out next time you see the Northern Lights. There are also tripods available for cameras, so even though you don’t have an expensive camera with you, you might just get a grandiose photo of the Northern Lights to go home with.

So go on, book a tour and go catch some Northern Lights!