Make sure you don't wear your glasses here because you'll steam up in an instant!

Gunnuhver is a geothermal area, a collection of mud pools and steam vents sprouting from the ground surface near Reykjanes. Legend has it that Gunnuhver is haunted by a female ghost who was laid to rest here some 400 years ago. The troublesome ghost of Gudrún Önundardóttir (from whom the spring gets its name) was tricked into taking hold of a charmed knotted-rope that led her across the field and into the big spring, where her spirit has laid for the rest of eternity.

The boiling geothermal reservoir produces a constant steam cloud that emanates from its surface. The surrounding mud pools are caused by the high amounts of carbon dioxide and hydrogen sulphide, which are released from the spring and cause the water to turn acidic and the fresh lava rock to turn into clay. You'll find the highest mud pool in Iceland here, which measures at 20 metres wide.

You can take a tour of the Reykjanes area or fly over it in a helicopter. Make a day of it by taking a tour of the lava fields, and then stop by the charming café in the Kaffitár headquarters. There is no shortage of accommodation in Reykjanes. 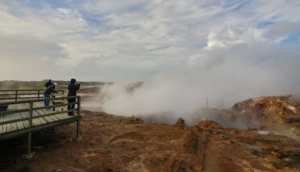 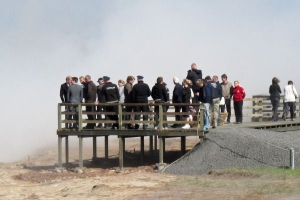 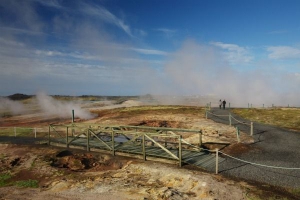 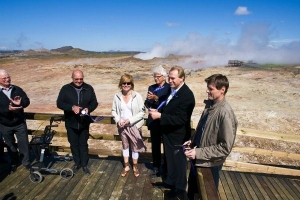