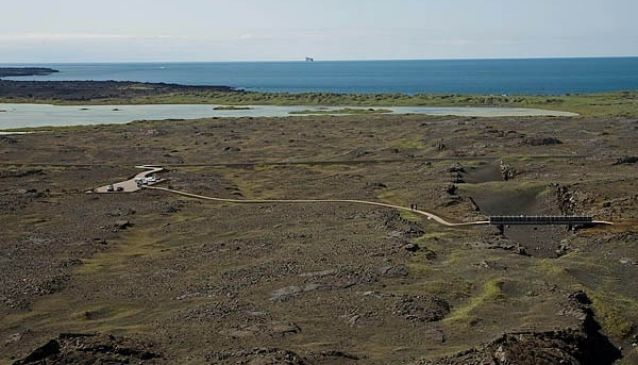 The Bridge Between Continents - Reykjavik

Directions to The Bridge Between Continents

On a landscape twisted by lava, the Reykjanes peninsula lies at the boundary of one of the world's major plate boundaries, the Mid Atlantic Ridge.

Here Heimsálfubrú, or the 'the bridge between continents', connects Eurasian and North American tectonic plates. According to the continental drift theory, great forces beneath the rifts are continuously causing the plates to drift apart.

'The bridge between continents' is a small footbridge built over a major fissure and is also known as 'Leif the Lucky's Bridge' in honour of Leif Ericsson, the first European to travel to North America. It stands as a symbol for connection between Europe and North America.

From the bridge you can appreciate the geological wonder of this part of the world. As you peer into the rocky, grey dust, it is easy to see how the first settlers confused the dust for smoke and named the areas Reykjavik and Reykjanes which translates to 'smokey bay' and 'smokey peninsula'.

Don't forget to pop by the information centre where you can pick up a certificate as reminder of the experience.