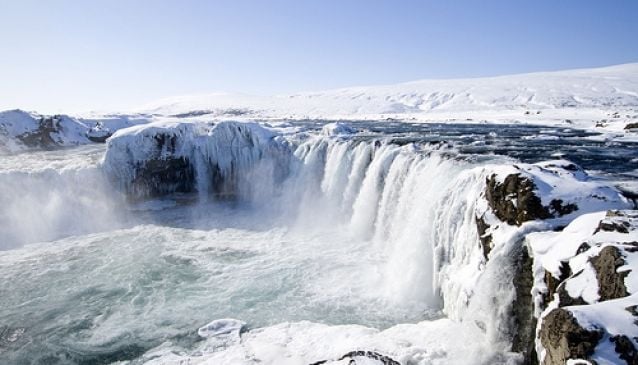 The Goðafoss waterfall (in Icelandic, 'the waterfall of the gods'), is one of the most impressive and larger waterfalls in Iceland. Located in the Mývatn district of North-east Iceland, at the beginning of the Sprengisandur highland road, the water from the river Skjálfandafljót falls from a height of 12 metres, covering a width of 30 metres. The river runs through Bárðardalur and Kinn as well as a lava field that is approximately 7,000 years old. The river has dug about 3km through the lava field through the ages to create a canyon. With the rocky promontories of the canyon in a horseshoe shaped edge, the falls from the river divide into two main falls with a few smaller ones scattered around.

The waterfall holds historic value, whilst being connected to one of the most important events in Icelandic history; the conversion to Christianity. In the year 1000, Lawspeaker Þorgeir Ljósvetningagoði made Christianity the official religion of Iceland and is said to have thrown his statues of the Norse gods into the waterfall after his conversion. According to legend, the is how the Goðafoss waterfall got its name. 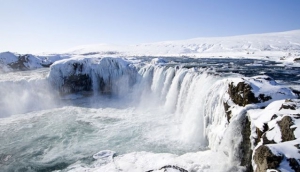