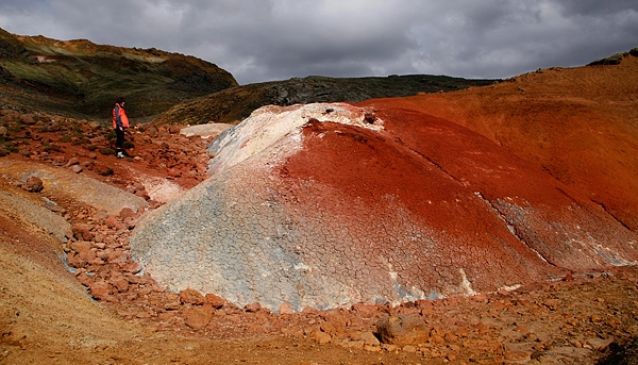 This Krýsuvík geothermal area in the western part of Iceland is greatly popular for recreation due to its expansive hiking routes as well as for its mind blowing scenery.

Like stepping foot on another planet, it's awash with columns of steam, bubbling mud pools and brightly coloured red, green and yellow rocks adorning the ground like jewels. Volcanic eruptions at the site over various years have formed explosive craters filled with water, leaving large pools, namely Grænavatn and Gestastaðavatn. Grænavatn is the largest, plunging 46 metres deep with a dazzling green colour due to its algae and sun absorbing crystals.

Krýsuvík did once belong to a separate parish and remnants of the old farming building can still be seen under the grassy mounds. The original church, built in 1857 was restored in 1964 and now stands as part of the National Museum's Historic Buildings Collection and with its miniature size, is utterly charming.

The whole area is very near Reykjavik, the capital of Iceland, and to the international airport in Keflavik. It is easy to get to and accommodation in the area is plentiful.

Lake Kleifarvatn is also nearby and is the largest lake on Reykjanes peninsula and the third largest in southern Iceland. At 97m to the bottom, it is one of the country's deepest lakes yet it varies in size over the year. It has been shrinking since 2000, after two major earthquakes that were likely to have opened up fissures at the bottom of the lake, started letting water out. The lake is popular for fishing as trout were released there in the 1960s and since then they've thrived and are an easy catch for budding fishermen. Legend has it that within the lake lurks a whale sized monster in the shape of a serpent whom only a select few have been lucky enough to see. 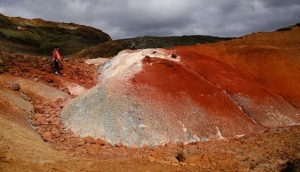