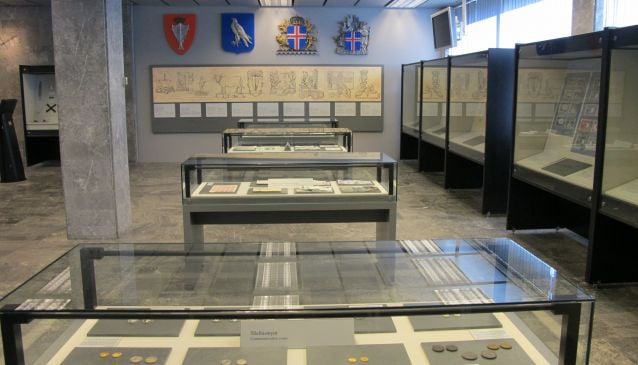 Right in the middle of the city centre, the museum is perfect to combine with other activities. It's just around the corner from Laugavegur where you can find all the shopping and restaurants you can imagine, and further down the seaside you can find whale watching companies, to name just a few!

In one of the houses of the Icelandic Central bank in Reykjavík, you will find one of Reykjavik city's best guarded secrets: the Numismatic Collection. To the layman, that means the 'Money Museum' - a collection of more than 20.000 coins and close to 5000 notes, as well as handbooks on numismatology and other related things.

In the museum you will find the oldest currency used in Iceland: Danish notes dating back to the 18th century, as well as every kind of Icelandic currency since 1922, which is when we first started minting our own money. Also on display are ancient Roman and Greek currencies discovered in Iceland, as well as examples of currencies mentioned in ancient Icelandic sources, such as Ducats and Marks. In addition to this the museum contains examples of the currencies of the major trading nations of Iceland, as well as notable medals, including author Halldór Laxness' Nobel Medalion for Literature.

The museum is just around the corner from the major shopping street of Iceland, Laugavegur, with all the shopping, restaurants and nightlife you can imagine. Accommodation of every kind is easy to find in the area, and getting around is a breeze.