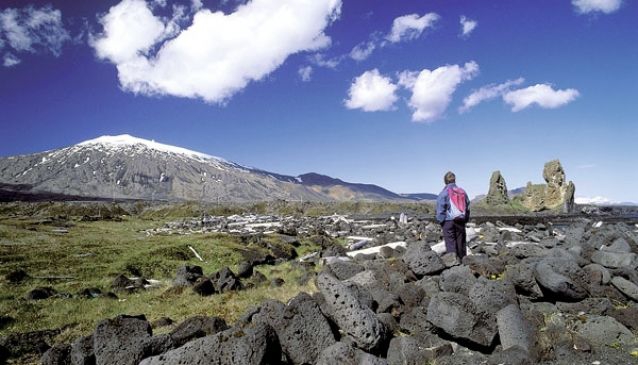 Londrangar is Best For

The londrangar basalt cliffs are a pair of unique rock formations in the west of Iceland. The cliffs are a pair of single, sharp, volcanic plugs which protrude majestically from the ocean. The original crater was eroded by the sea, leaving behind the more hardy basalt. It wasn't until 1735 that dwellers dared to climb the larger cliff and the smaller wasn't attempted until even later in 1938. Nowadays it is a popular hiking spot, with many tourists and locals ascending the cliffs every year.

Due to the craggy rock faces and winding coastline, Londrangar is a popular nesting spot for all kinds of birds, in particular puffins and the typically Icelandic black-legged kittiwake. There area is surrounded by mysterious history, as according to folk tale, poet Kolbeinn Joklaskald had an eerie encounter with the devil at the foot of the cliffs, and for years, farmers in the region refused to make hay on the hill as it is said to be land belonging to the elves.

The cliffs are a mere day trip away from Reykjavík where you will find plenty of accommodation and activities, and they easy to approach by car or bus. In the area you will also find Snæfellsjökull glacier, Arnarstapi and Djúpalónssandur.